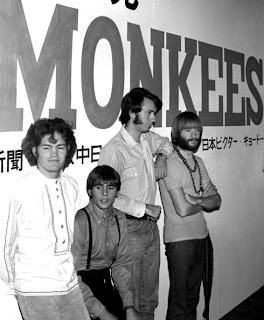 Now what right minded, free thinking individual doesn't like The Monkees? What started off as a pretty cynical exercise in creating an American Beatles circa 'Help!' turned into a cultural phenomenon. And a pretty hot live act, too. We all know the story don't we?..and all the apocryphal stuff (Charlie Manson, Stephen Stills' teeth blah blah blah) but the music gets forgotten sometimes, which is a shame. Regardless of who played on the records, they’re still great and they’ve lasted the test of time remarkably well. Whether or not they’re worth seeing in 2011, I’m not sure - maybe someone can enlighten me on that one.

On to the recording…it’s 1968 and our four loveable moptops (US Division) are inevitably playing the Budokan in . They’re also being filmed for a TV special. Sadly, the video seems to have vanished which is a goddamn tragedy, but the audio is still intact – complete with the enthusiastic interjections of a couple of Japanese presenters. It won’t impair your enjoyment, Monkeefans. The recording quality is pretty decent for such an aged show – it’s a bit crunchy in parts, but generally it’s fine and dandy. Check out the sample video below.

What is special about this recording is that it sees the band as a ‘real band’. That means that they play (almost) everything themselves. Apparently Davy Jones was taught to play the Bass from scratch, which shows real character. He does a bang up job, playing when Peter Tork switches to Organ, Guitar etc. They sound like a garage band. This is a good thing. They’re helped out by their support act (The Floral) on three tracks, but other than that, it’s Monkees all the way. Smart. 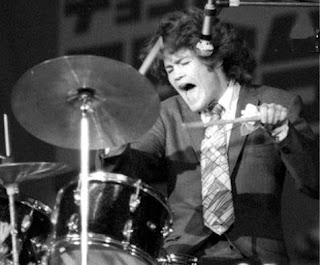 Contextually, this was almost the last throw of the dice for the band. Tork was to leave the band a few months after this gig and the band was still licking it’s wounds after the kicking that ‘Head’ got. We all love it now don’t we? The key word in that last sentence is the word ‘now’. So the guys we’re pretty fired up and deliver a great, broad show including all the hits, some solo spots and a tasty rarity or two. I could have lived without ‘Peter Percival Pattersons Pet Pig Porky’ (and the accompanying mains hum), but hey, watchyagonnado? It was the 60’s after all.

This is a great show and a fascinating curio from a different world.

Email ThisBlogThis!Share to TwitterShare to FacebookShare to Pinterest
Labels: Monkees