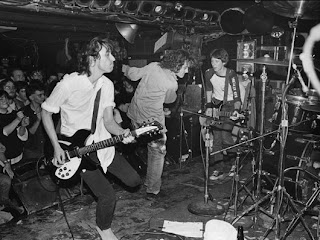 It was a Tuesday morning. Sometime in April, I think. I'd just joined a band - a band who worshipped at the altar of another, not quite famous band. In an attempt to keep up and show a bit of willingness, I'd purchased one of the not quite famous bands records...just for research purposes and to see if there were any Basslines I could steal. I picked the cheapest one, not wishing to throw money away on a dud. I played it once and it sounded alright...a bit low key and sadly lacking in the shredding Guitar solos that I loved so much. The cover was a bit murky too... some sort of bridge thing covered in weeds and pictures of four freshly scrubbed college students. "Don't these jerks know anything about packaging?" I thought as I looked longingly at David Lee Roth arching backwards on the rear cover of the first Van Halen album. I played it again. It sounded...better. What was the singer going on about? Nice Bass lines...good harmonies too. I put the headphones down and went to sleep. The next morning - Tuesday morning - I awoke and before breakfast, before brushing my teeth, before getting dressed I had to do one thing -play that record again. I've played it no less than once a fortnight since April 1986. I'm playing it now and it still sounds like nothing else.

'Murmur' changed my life. How fucking Hollywood is that? But it did - at a stroke, the REO Speedwagon and Sammy Hagar records scattered around my bedroom looked vaguely ridiculous. I couldn't bear to look at them after a while and those 'Pre REM' LPs that didn't get binned were placed on a high shelf...REM was all I needed now. I sought out everything by them- every record they mentioned in inteviews, every record that sounded like them, every record by bands which came from  where they came from. It was all so vital and thrilling and new... like drinking spring water after a lifetime of no-brand diet Cola.

They could do no wrong. They said they'd never mime in videos and they didn't (until MUCH later). They said Big Star were great and they were. Their live shows were chaotic, passionate and ever-changing. When they played 'Radio Free Europe' at the Hammersmith Odeon on September 12th 1987, I leaped out of my chair so hard I cut my shin.

Mike Mills became my hero. I ripped off his playing so much, I considered sending him a royalty cheque.

REM were my gateway into a new world and a new way of thinking...from music to dress sense to politics to Greenpeace to almost everything.

And now, they've split. I'm happy and sad at the same time. Happy that they aren't grinding on making patchy records that sound like other people, but sad that they aren't -well - a presence, I guess. A fixed point of reference. I'd have liked to have seen them once more, knowing it was the last time I was over going to hear some of those songs that altered the course of my life. The last time I saw them at some cattleshed sized venue in the UK, I was so bored I could barely concentrate...until I heard an echo of the music that made me wake up - just for a moment.

They've won countless awards and sold equally countless records. That doesn't matter. My story is not unique...I've met so many people in bands who started playing when they heard 'Murmur' or 'Reckoning' or any of those dazzling 80s albums. They inspired people. Me included. I'll miss them.

Email ThisBlogThis!Share to TwitterShare to FacebookShare to Pinterest
Labels: REM 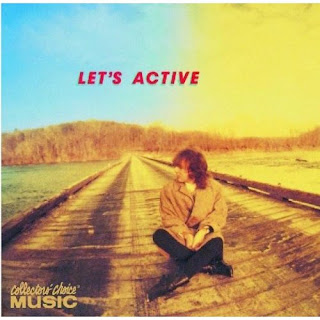 Hey hey! Hang out the streamers and all that Jazz - this is post #100!

Yep, 'Big Plans...' started in early Jan this year and is still going strong. I know some Blogs can knock out 100 posts in a month or two, but the wheels grind slightly slower here at BPFE towers. For me, it's a bit of a milestone for many reasons....

- I'm a great 'starter' - ie I'm full of enthusiasm for a brief moment and then another shiny object catches my eye and I'm off again, so to keep this up for nearly nine months is MASSIVE for me.

- I've corresponded with so many cool people over the year - a big HI! to Don V and the ASH types, Adelle, Ralph D, Sal at Burning Wood...the list goes on. Stout fellows all.

- I've been turned on to a bunch of great music (and a TON of stuff by my fave bands that I didn't know existed). Thank Jeebus for Broadband and MegaUploads reasonable subscription rates.

- I've found out that there are at least 10 people who like Hugo Largo. Who knew?

- I've had a (semi) legitimate excuse to write cack about music on a regular basis and have a bunch of people read it and..ulp...enjoy it. Ta everso.

Right, before I get all 'group hug-gy' about this whole thing, lets get to the meat of this post. As a treat for your persistence, here's a mother-lovin' ultra gem of a post. Yep, it's demos, rough mixes and out-takes from Let's Active's magnificent 'Big Plans For Everybody' sessions. It couldn't really be anything else, could it? Decent sound quality, amazing tunes and your chance to play 'spot the difference' with the finished version, which I assume is on heavy rotation on your HiFi, right? It had better be.

(Side note - I think I pulled this off Dimeadozen back in the day, but I see that the magnificent 'Wilfully Obscure' blog posted this stuff last year, too. Another thing I've learned is that whatever I want to post or write about, WO have done it first, better and with more grammatical accuracy than I could ever hope to do. Damn you!! - only joking, I love you guys...)

You don't need me to tell you that Mitch Easter is God, now, do you?

Thanks for the century Big Planners - you've made a sad old Music geek feel like he has a purpose.