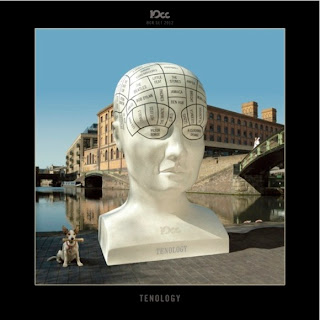 Yeah, it took 10CC to coax me out of retirement.
It’s a good time to be a 10CC fan right now. In the space of about three weeks, I’ve seen loads of positive reviews for the loverlee ‘Tenology’ boxed set,  as well as major articles in The Guardian and Uncut. I knew sooner or later, the world would wake up and smell the java. (Leans back in chair, smugly…)
So yeah, finally the 10CC boxed set that a handful of no life pop obsessives have been praying for.  And you know what…it’s OK. Nicely presented and sounding gorgeous. Designed by Hipgnosis with a well written hardback book thingy too. I even got a signed print with mine too. Smart. But here’s the thing – there ain’t a lot of surprises on it. Why? Well, as all right thinking people know, the 10CC’s are such anal perfectionists that there is no such thing as an out-take. If a track doesn’t cut the mustard, the master tape is taken by a specially modified truck to a facility normally used for the safe disposal of nuclear waste, where it is comprehensively eviscerated. Or something. We do get the demo version of ‘People in Love’ and a lovely little curio called ‘The Making of The Dean and I’.
So why should you buy this? Well, it’s 10CC and therefore utterly essential. You can never have too many versions of ‘Old Wild Men’. Never. The clincher for me, is the DVD that comes almost apologetically attached. It neatly hoovers up the lion’s share of promo vids (completists are directed to the Dutch(?) DVD ‘Donna’ that squeezes an extra couple of post Godley/Crème tunes on) as well as some significant TV appearances. I know they’re all on YouhooTube, but it’s nice to have lovely, clean, high def copies. They’ve also dusted off the BBC ‘In Concert’ from ’74 (you saw it here first, trendsetters…) It’s the visual aspect of the band that separates them neatly from all their contemporaries. In 1974, even if you looked like a bricklayer, you covered yourself in glitter, bacofoil, eyeliner and fake fur, strapped on a pair of boots which added three feet to your height and wobbled unsteadily onstage. 10CC looked like four graphic designers dressed for a Friday night trip to the wine bar. Eric Stewart and Lol Crème managed to sustain one solitary hairstyle for an entire career, whilst Godley and Gouldman massage their wiry curls into a variety of mullets and afros as they see fit. Some very sexy guitars too…a handful of Les Pauls, Mr Gouldman’s handsome black Rickenbacker and even a Gizmo equipped Strat. Smashing.
The tunes…well, it’s biased towards the ‘classic’ line-up, but in context, much of the post ‘How Dare You’ stuff sounds superb. ‘Runaway’ and ‘One Two Five’ are gorgeous. (The video for the latter reminds me of The Tubes, for no real reason…) B sides (remember B sides…?) are present and correct including the lost gems ‘Good News’ – this could be Kevin Godley’s finest vocal performance and the almost-released-on-Apple-almost-debut-45 ‘Waterfall’.  There are a couple of stinkers too…if anyone has heard ‘Hot To Trot’, they’ll know what I mean…
Yeah, they’ve missed stuff off, but who gives a fudge? I’m not sure who this lovely looking briquette of genius will appeal too, apart from me , of course, but if it turns a few of ‘the young folk’ onto ‘em, that will be A Good Thing.
I have a dream gentle reader. A dream that one day, the mighty 10CC will be as respected as their magnificence deserves. Until then, there's this. And it'll do.