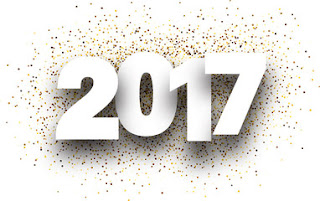 Well there goes 2017, nearly. Personally, I've had a great year of listening to new music after a few years of truding wearily through my back catalogue.   I made a conscious decision to listen to more, unfamiliar (well, unfamiliar to me at least) music, and I forced myself to do this by joining the staff of Rocker, PopMatters and GigSoup. That gave me a focus and a deadline, which for a slacker like me, are very important things.

So, courtesy of the lovely people at GigSoup, here's my top ten picks from 2017.

10 Cheap Trick – We’re All Alright
Forty years after their brilliant debut album, Cheap Trick have casually delivered yet another gem. “We’re All Alright” might veer a bit closer to hard rock territory than some of their Cuban heel sporting fans might like, but the tunes remain . Robin Zander still sings with the power and precision of his ’77 self and Rick Nielson still proves that you don’t have to have long curly hair and skin-tight leather pants to be a bona fide axe hero. “Hey kids! Come and look at dad! He’s rocking out and he’s totally badass!”


9 Slowdive – Slowdive
From out of some dimly lit student union bar, Slowdive re-emerge, blink in the harsh, unfriendly light of 2017, strap on their guitars and make one of the best albums of the year. When bands re-form, you have to brace yourself and prepare for the worst – all the youth, inspiration and hunger which drove the band in their early years can’t possibly still be there now, can it? Well in the case of “Slowdive” not only are they all still there, they’re as focussed as a laser beam. Put your prejudices aside and wallow in a steaming hot bath of sumptuous guitar noise.

8 Public Service Broadcasting – Every Valley
Who thought that a concept album about the decline of the Welsh mining industry would be a good idea? Public Service Broadcasting, that’s who. And they were right. “Every Valley “is  a fascinating, uplifting and tragic trip through a piece of British history, using radio, TV and newsreel audio samples. It’s a Ken Loach film for the ears. Immaculately played and constructed, it seemed to mirror the soap opera chaos of 2017’s political situation without once referring directly to it.

7 Aimee Mann – Mental Illness
For “Mental Illness”, Aimee Mann stripped the production back to guitar, piano, strings and voice and just let the tunes speak for themselves. Fortunately, they do. Mann is a consistently great songwriter and the songs on this album are consistently great. There’s a mood of comfortable melancholy in this record which makes you feel sad and happy at the same time. Not every record would stand up to this minimal approach, with every instrument and lyric so open and exposed. That’s because, nor many records are as good as “Mental Illness”.


6 Dream Syndicate – How Did I Find Myself Here?
Age has not diminished the Dream Syndicate. For their first record since 1988, the band have channelled almost thirty years of angst into eight incendiary tracks. The guitars are loud and sound annoyed. It’s a glorious noise, combining abandon with control, with Steve Wynn’s enigmatic lyrics sitting nicely within the fuzztone. “Do not go gentle into that good night” said Dylan Thomas – the Dream Syndicate definitely agree.

5 Daisy House – Crossroads
That fact that folk-rock exists in 2017 is nothing short of a miracle and the fact that Daisy House have made such an incredible folk-rock record this year is doubly remarkable. For their fourth album, the father/daughter duo have excelled themselves with an album that takes all the good parts of the Byrds, Buffalo Springfield and early Fairport Convention’s back catalogues and made a record which sounds fresh and contemporary. Beautifully played and (especially) beautifully sung, “Crossroads” will hopefully inspire people to explore the dusty recesses of grandad’s record collection or maybe even pick up a twelve-string guitar.


4 Rips – Rips
The most assured and confident debut album I’ve heard in years. From NYC, the Rips channel Television, the Strokes and some of the more melodic aspects of Sonic Youth into a very tasty package. With critics and pundits desperate to find The Next Big Thing, the answer could be under their noses. “Rips” reminds us how great, two electric guitars can sound in the right hands.


3 Pugwash – Silverlake
Essentially “Silverlake” is the work of just two people – Pugwash mainstay Thomas Walsh and pop-rock poster boy, Jason Falkner. Both artists have digested the finer works of the Beatles, Beach Boys, XTC and a host of others and made an album that can sit alongside any of those band’s finest works. Why “The Perfect Summer” wasn’t a number one single is both baffling and infuriating. Eleven tracks of consistently great, unapologetic pop. The antidote to 2017.

2 Mark Mulcahy – Possum in the Driveway
Any album that goes from mariachi to college rock via rhythm and blues is always going to be a bit of an acquired taste, but if you’re familiar with Mulcahy’s back catalogue, you’ll be well prepared. Blessed with a unique voice, Mulcahy navigates all these disparate styles with ease and knits the album together beautifully. The opening track, “Stuck on Something Else” was the best song I heard this year and the rest of the record isn’t far behind. A remarkable record from a remarkable talent.

1 Captain Wilberforce – Black Sky Thinking
When I reviewed this album for GigSoup in May, I wasn’t sure that anything could top it. I was right. “Black Sky Thinking” is pop perfection. 12 tracks of beautifully written, immaculately played, memorable powerpop which goes far beyond that genre’s usual limitations. The songs twist and turn in unexpected places with lyrics that run from laugh out loud funny to dark and desperate. In the era of the playlist, we’re used to cherry-picking tracks from albums – with our attention span tragically truncated to approximately eight seconds, according to recent scientific research, we flit from song to song like listless bees, gathering pollen in a meadow. Not so “Black Sky Thinking”. No fast forward. No skipping tunes. Well, why would you want to? Pop-rock seldom, if ever, is better than this.