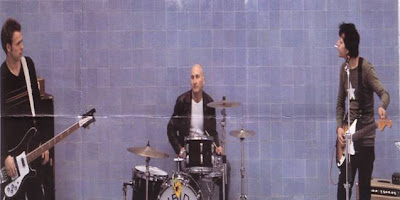 . Famous for Death Metal, Pickled Herring, Ibsen, Greig and Aha. And lots of other stuff too, I’m sure. What it’s not famous for is PowerPop. But what have we here…?

I know very little biographical detail about this band, other than they featured Even Johansen who is a big man on the Norwegian Music circuit nowadays, but this is from 1997 when he was the leading light in this short lived but sterling band.

My introduction to the band was when a record company rep thrust an EP into my hand saying ‘Play this….it sounds exactly like the Posies’. So I played it. ‘Exactly’…is a little way off, but that combination of melodic vocals, great songwriting and feral guitars was close enough to pique my interest. As far as I know, they released four EPs and an album – the beautifully named ‘Killing Some Dead Time’. Interested parties can pick them up for pennies (literately) on the InterWeb. I was pleased to see that the aforementioned album is still available via Amazon for download, so I ain’t gonna post that here. Instead, here are the non-album tracks from the EPs. They’re a mixed bunch (including a surprisingly tender version of ‘Annie’s Song’ – yeah, that one). Quality veers from really great (‘Hurry Slowly’) to the out and out weird (a version of ‘Blow’ that sounds like it was recorded at 16rpm…), but let’s face it, it ain’t gonna cost ya nothin’ to try it out, is it…?

(Blow', from the album 'Killing Some Dead Time')

This is posted as a bit of an hors d'oeuvre….the album is really where it’s at and features some blistering Pop-Rock stuff in that lovely mid 90’s, just post-Grunge style we’ve (well, maybe just me then…) come to know and love. Highly recommended for fans of early TFC, Posies, Replacements…you know –that lot.

Give ‘em a chance. It’ll be another bullet in yer Smug, RockSnob arsenal.

Oh, by the way, Googlesearching for the bands name is quite an eye-opener…..

Oh and by the way again - to avoid spam (of the most unsavoury nature...) I've replaced the the 'i' in the bands name with an '!'

Email ThisBlogThis!Share to TwitterShare to FacebookShare to Pinterest
Labels: Lbido