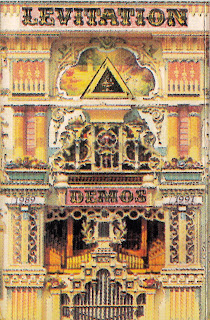 As promised about 100 years ago, here's some more aural yumminess from everyone's favourite IndiePopProg rockers, Levitation.

Following on from the non album tracks I posted a while ago, here are some demos that were circulated as a limited edition fan club release back in the day. The tunes are from 1989-1991 and feature some stuff that made it on to their superb debut album, their EPs and a tune or two that slipped down the cracks. There's some fascinating stuff on here that you should hear. Here's the bumf from the original cassette:

“This is a selection of 8 Track recordings made between 1989-1991 and mixed especially for this limited edition of 800 cassettes.

‘Nadine’, ‘Smile’ and ‘Rosemary Jones’ were subsequently recorded in Oct 90 and appeared on the ‘Coppella’ EP as the first official Levitation release on Ultimate

The completed version of ‘Firefly’ first appeared on the ‘Ever After’ EP recorded in May 1991. A further version of ‘Smile’ and definitive versions of ‘Arcs of Light and Dew’, ‘World Around’, ‘Embedded’ and ‘Coterie’ can be heard on Levitations first album ‘Need For Not’ released by Rough Trade in May ’92. The instrumental ‘Jay’ can only be found on the Rough Trade single ‘World Around’ released prior to ‘Need for Not’

‘Origins’, ‘Mantra’ and ‘Day by Day’ appear for the first time on this cassette

I’ve already mentioned how ace this band really were. One of the great ‘lost’ bands of the 90’s. My advice to you, boys and girls is - download, turn your Phasers and Chorus Pedals up to ‘EnormoFlange’ and wallow in the (almost) contemporary Psychedelia of Levitation.

(Thanks again to the good people of the Spiritualized message board for pointing me in the right direction...)