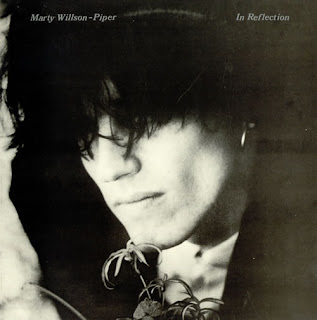 It must have been tough being Marty Willson-Piper in the mid-80s. You work hard, writing loads of groovy tunes only to have your bandmate swoop in with everso slightly better ones. Pah! He did have lovely hair and Hollywood cheekbones though.

This is his first solo album, which came out originally in 1987. A CD version came out fairly recently for about an afternoon and has since slipped quietly away again. But now it's here. And it's a rather lovely collection of his home recorded demos, including one for 'Volumes' which later turned up on 'Remote Luxury'.  Back in the 80's, we hadn't got ProTools or GarageBand or any of that malarky - we had 4Track cassette recorders. "Would you like hiss with that vocal track sir?"..."Yes please!" Marty does a great job of getting his vision across using old and inappropriate equipment and a drum machine that sounds like he's hitting a muffin tin with a biro. The songs range from  Church-y jangle to pretend Krautrock, via Kevin Ayers-esque poshboy psychedelia. Opinion tends to be divided about MWPs solo stuff - it can be stunning but it can be tooth-achingly twee. This album strikes a balance between the two and is one of the better solo Churchmember albums. Steve Kilbey and Peter Koppes turned in splendid low key releases about this time (Kilbey's 'Unearthed' is a bit of a classic) and if you can cope with Marty's back-bedroom poetry, so is this.

A few months later 'Starfish' was released and the Churchs' world was turned upside down. But for now, here's a little piece of naive wonderment....

PS: Why vinyl records are better than mp3s and all that part #267. When this was first released, this album came with an ace little booklet, detailing MWPs recording process and his inspiration for all the tunes on the record. I've scanned it and included it with the music...oh yeah, it's autographed too...ain't I a stinker?


In Reflection
Posted by Rushbo at 00:36