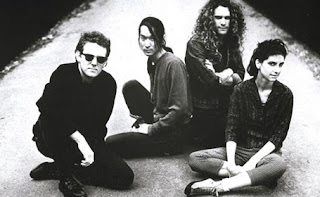 My unrequited, unhealthy and colossal ultranerd fanboy obsession with REM in the latter half of the 1980s has been documented elsewhere on the blog....and will be referred back to with nauseating regularity I'm sure. It did lead me to some interesting and inspiring music including Big Star, Game Theory, Let's Active...and Hugo Largo. You can only imagine the joy I felt when I heard that Stipe had produced an album for an NY band. The ArtSchool poseur in me wept with delight that the band consisted of two Bassists, an Electric Violinist, a Vocalist and NO Drummer and the album was called 'Drum'. How postmodern. I ordered it all the way from America, not knowing what to expect. Suffice to say, that album is one of my favourite albums of all time


I began to obsess about the band. In those pre-internet days, I had to trawl through fanzines and lord knows what else to get any kind of info about them -the occasional comment in the UK music press, a review in 'Flipside'...and that was it. The album got a British release (with extra tracks, no less!) and I scooped that up. And then finally, they came to the UK for a gig. Oh my days. They played at the Cambridge Theatre, London on July 9th 1988 and were first on the bill supporting The Durutti Column and David Byrne. ...quite a concert, let me tell you. They played for about 30 minutes and my twentysomething mind turned to jelly. Intense is not the word. I dragged my girlfriend of the time back to London to see them headline at The ICA later that year...she hated every minute but I was in raptures, but that's the effect they had on people.

Inevitably, they signed to Brian Eno's Land record label for a not-quite-so-transcendant second album ('Mettle') and toured the UK, supporting That Petrol Emotion...a pairing that I couldn't quite understand. And then...nothing. Violinist Hahn Rowe has gone onto sessions and production, Bassist Tim Sommer  was a top-dollar record company executive and is involved in a number of projects including ambient soundscapers Hi Fi Sky. The other Bassist, Adam Peacock...has dissapeared. Vocalist Mimi Goese has done the solo thing as well as collabrating with Dance Music Polymath, Moby.

These recordings came as a trade about 20 years ago from an American fan, whose name I have sadly lost...if you're reading this, please accept my apologies and a million thank-yous. The first part is their Tim Sommer-less third album, which is sadly unreleased and (IMHO) is better than 'Mettle' but not quite as good as 'Drum'. The rest collects an amazing KCRW session (hosted by the fabulous  Deirdre O'Donoghue ) along with demos and three songs from a live gig from an unknown venue.

There is every chance you have never heard of this band, but my advice is this: If you have an interest in music that ain't just 'moon-june-spoon', enjoy bands like the Cocteau Twins and The Blue Nile, appreciate the use of mood and atmosphere, you dig creative bassplaying and are generally a supercool hep-cat who members of the opposite sex find powerfully exciting, then you MUST download this. Do you want small children to point at you in street and smirk? You don't do you?

This just might be the best music you have never heard.