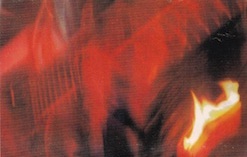 Levitation were a great live band and here's the proof. This is a dub of a limited edition FanClub cassette - only 800 were made, fact fans. There's a nice, everso slightly unhinged vibe to the whole performance, which I like a lot. And the drumming....oh the drumming. Stand up and take a bow, David Francolini.

Great Rock Entrances of the 90's Part 1. I only got to see the band once, supporting All About Eve* at a dreadful venue called the Aston Villa Leisure Centre - basically, an enormous galvanised bucket with a burger stand. Levitation (minus maestro Terry Bickers) took the stage and started plugging away in that swirly, nouveau-psychedelic manner of theirs. After about a minute of this, Terry B comes HURTLING from stage left, Guitar in hand, heading for the mic. His progress was hindered slightly by an unidentified obstacle on the stage, which he either hit, or swerved around (it was hard to tell, he was moving so fast...seriously). This caused the errant Guitarslinger to make a wide arc around the stage, his body at a 45 degree angle,  still moving at light speed. Amazingly, he was able to bring himself to a halt in front of his mic at exactly the right moment for him to start singing. He didn't miss a beat and made out like the whole thing was intended. Terry Bickers: Mr Showbiz.

(* Long time readers will remember that I saw those other BPFE faves Kinky Machine scaring the life out of All About Eve fans. Just when they'd recovered enough to apply some fresh eyeliner and read a bit more Gormenghast, along come another bunch of ruffians. And I didn't stalk AAA, by the way, although I did have a bit of a crush on Julianne Regan)