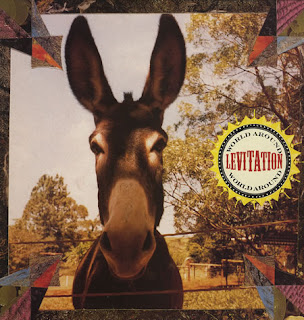 "You can be progressive without being pompous. It sounds like a cliché but I don't care - we are a progressive band and we're in the here and now." - Terry Bickers interviewed by Steve Sutherland Melody Maker April 27, 1991.

As a long time, die-hard, card carrying, 100%, gold plated, 10 year guaranteed Church uber-fan, I had a bit of a problem with The House Of Love. Like a lot of my peers, I believed that HOL mainman Guy Chadwick should be tortured slowly until he revealed (preferably on live TV, satellite broadcast to the entire world) that he nicked all his ideas from Steve Kilbey. Well, I’ve mellowed considerably since then and turned into quite a fan of the HOL, especially the much maligned ‘Fontana’ album. And the star of that album is Mr Terry Bickers…the leading light of Levitation.

After an ‘acrimonious departure’ (ha!...I love that expression – it covers a multitude of sins) from The House Of Love, Our Terry formed Levitation. During his time in HOL, Terry had established a reputation as being a bit of an ‘eccentric’ and was lampooned in the Music comics. A bit of a shame really, as he’s quite a talent and all that ‘Mad Tezza’ stuff diverted attention from his obvious skill as a geetar slinger par excellence. Levitation showed ‘em all how stupid and facile they were. Mr B assembled a world beating band and released some outstanding music, starting with the ‘Coppelia’ EP. Not only does he excel as a Guitarist, his voice isn’t bad either. The EP features four neatly controlled pieces of Indie-Pop-Prog. I was excited. Another two EPs and an album followed, all of which hinted (and occasionally shouted) at greatness.

('Even When Your Eyes Are Open'
their first release on Chrysalis)

Levitation combined the coolest of influences...a bit of Krautrock, a little Psychedelia, a dash of indie-schmindie, a healthy helping of Prog and some of that Post-Punk, 60's inspired stuff that we all know and love.

They toured (often supporting the most unlikely of bands…The Fall, anyone?) and got signed to A Major Label. Guess what happened next…? Yep, After playing a bad-tempered fifty-minute set at Tufnell Park Dome in north London on May 14, 1993, where the band were co-headlining with Eat, Terry threw his toys out of the pram and announced his intentions to leave. Among his onstage comments and announcements were "No corporation is going to stop us, gas is our business, cars are our business, the music business is our business.." (paraphrasing Killing Joke's track Age Of Greed); "This is the last time you'll see me for a bit"; and (most infamously) "Levitation are a lost cause as far as I can tell. We've completely lost it haven't we? Haven't we?" That put a bit of a damper on the proceedings and Mr B made a sharp exit from the band he’d formed. Years later, he admitted to being incredibly hasty in his proclamation. The band soldered on without him, finishing off the album they were working on at the time – ‘Meanwhile Gardens’. Sadly, without the ‘star’, the band folded, leaving behind some unfulfilled promise and a whole bunch of great tunes. I guess you really can’t catch lightning in a bottle…

For your delectation and education, this is the first of four Levitation posts. As the album is still available for official download, I'm concentrating on the rarer material.  This first post rounds up all the non-album EP tracks and some other bits and pieces. The subsequent three will be the original version of ‘Meanwhile Gardens’ with Bickers on vocals (his contributions were wiped and replaced with those of new frontman Steve Ludwin when the album was finally released in Australia only), demos for the highly recommended 'Need For Not' album and a storming live set from Reading University in Feb '92. I suggest you grab 'em all.

But first of all, let’s bask in the short lived but solar brilliance of Levitation…