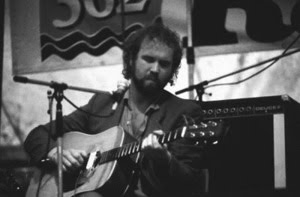 Yeah yeah, I know...'This isn't Post Punk or PowerPop' you're saying (whilst sneering, probably), but it is a collection of good tunes, without a doubt.

John Martyn. What can I say? A man who was capable of drinking Keith Moon under the table and matching his hellraising antics busted TV for busted TV, but also capable of writing the most gossamer fine music and heartbreakingly emotional lyrics. A man who still got off his butt and played live even when he was wracked with a life-threatening illness. He had his leg amputated. He carried on. In an era when 'Rock Stars' (note the ironic quote marks and capital letters, there) cancel entire tours because their favourite Tee Shirt is still in the wash, he was the real deal. And this recording proves that in spades...and clubs...and hearts...and the other lot.

Here's Mr Martyn recorded at the Antoniano Theatre in Bologna (sounds posh, eh readers?). It's a solo gig with John alternating between folky acoustic Guitar tunes and mindbending echoplex freakouts. You love it already, don't you? Lot's of nice banter (I could be wrong, but some strong liquor or similar may have been imbibed by the artist) and plenty of references to the intense heat. In spite of that, it's an incredible performance and a superb setlist. 'Spencer The Rover' is a standout. Tears of joy are compulsory.

I was lucky enough to see him a couple of times in the 80s - the second gig was one of the most bizarre concert experiences I have ever had. It was at the late, lamented Ronnie Scott's Club in Birmingham - sadly it's now a Pole dancing joint - one of about seven in a square mile in the town centre. What that says about my beloved city, I don't really wanna think about. Anyhoo, John was in high demand, as when I arrived I was amazed to find that the only seats left were actually at a table on the stage. Yep, ON the stage. I was close enough to hear the Bassists thoughts. Thankfully, the monitor mix was great (as I was behind the PA) and the performance was fantastic, if slightly intimidating.

He was awarded the OBE in the New Years Honours list of 2009. Not good enough. This man should have been crowned the King of Scotland. Lairy, contrary, mercurial and brilliant. We should be grateful to have been in his orbit.