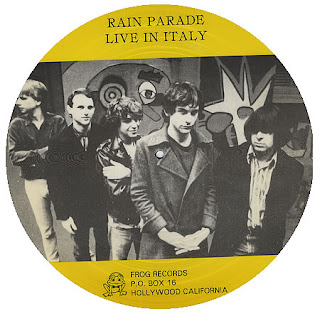 I really miss the (Old Grey) Whistle Test. For the benefit of non-UK BPFE-ers (I have to think of a snappier name than that (Big Planners? Beepees?) The Whistle Test was a great BBC music magazine programme of the 70's and 80's. What I loved most was the fact that it looked like it was filmed at the back of a furniture warehouse. The presenters were genuine enthusiasts, and in the mid 80's, any Paisley Underground band visiting the was guaranteed to make an appearance. That's where I first saw The Rain Parade.

I was in a bit of a transition period at the end of '85. My Metalhead years were coming to an end and I was looking around for something with a bit more substance. I tuned to the OGWT, saw the Rain Parade and the die was cast. They were a funny looking bunch - Matt Piucci's cowboy boots and Mark Marcum's headband seemed rather incongruous, but the tunes...oh my. Fantastic versions of 'Depending On You' and 'My Secret Country' blew my tiny, Eddie Van Halen obsessed, skin-tight jean wearing, bullet belted* mind.

They were confusing too...some of the references were easy to spot (their first album, the awesome 'Emergency Third Rail Power Trip' contains pretty straightforward Garage Rock tunes - they're almost pastiches) - but by the time they got to 'Crashing Dream' (the album they were plugging on The Whistle Test) it was hard to discern just what the hell they were listening too. And I like that.

This live recording (see! we got there eventually!) is a superb soundboard from an Italian gig the month before the revelatory TV appearance. Sound quality is pretty close to perfect (although the acoustic Guitar sounds a bit like a massive rubber band twanging away…) and the performance is great. 'Crashing Dream' gets a bit of a kicking from the cognoscenti because of its '80's production' - well here it is, live and raw and those songs sound bloody ace. Eat your words, doubters. This is from the master tape from which a live, picture disc was manufactured in the 80's (pictured above). The mastering was shoddy and featured just 11 of the 17 tracks’ on here. So even if you’ve got the disc, you REALLY need this.

This is my favourite live recording of my favourite era of the band. The good news is, there's plenty more to come. Woohoo!

* I never had a bullet belt, I just thought that was a nice turn of phrase...