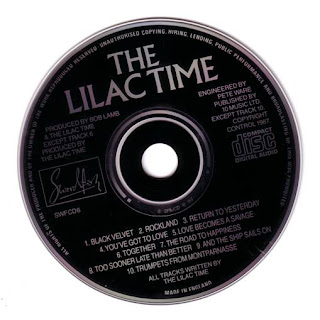 This is a bit cheeky as there is a version of this CD in print and available from all good music retailers. But this version, laydeez and genlemen, is the original, 1987 Indie version. And I think it's better.

If you answered a, b or c...you're right. But he's a damn sight more than that.

Stephen Duffy is one of the best British songwriters of the last 30 years. Fact. And most of those songs are written for his band of bucolic fellow travellers, The Lilac Time - Big in , but pretty tichy in the rest of the world. This is wrong. How can anyone NOT like a guy that started off in a low-budget Glam band, join and leave Duran Duran while still at school, have a big production techno-dance hit, pioneer sampling and then give it all up to make acoustic music with his brother? Yeah, I know....cool eh?

Now I know I keep banging on about , but ol' Stevie is a bit of a legend round these parts - a native son. I got into music retail in the mid-80's and everyone I spoke to had their own Duffy story. For further information see 'We Hate It When Our Friends Become Successful’ by Dr. S.P. Morrissey. I was mildly amused by 'Kiss Me' (and irritated by his incredibly fey 'Top Of The Pops' performance) and consigned him to the bin marked 'As famous as any Brummie is gonna get'. And then I heard 'Return To Yesterday'.

His move from techno-popstar to acoustic troubadour made the local paper. Then again, it doesn't take much to make the papers in Brum. The gist of the article was that Stephen had turned his back on stardom and 'that ' and made a low-key record in a studio in Kings Heath. Whether he turned his back on stardom or visa-versa is a moot point, but... Anyway, this wasn't the Duffy we were used to. Out was all the hi-gloss production and in were acoustic guitars, Nick Drake references and, most importantly, his genius brother Nick.  And the result was the Low-Fi gem called 'The Lilac Time'.

It crept out with zero fanfare in 1987 on a label run by some guys from a local record store - 'Swordfish'. (Ah, Swordfish Records...as a teenager I used to hang around that store just to hear the guys behind the counter talk so learnedly about music. Eventually, I plucked up the courage and £2.99 to buy a copy of 'One Size Fits All'. I got a nod of approval from the sages in the shop and almost floated home). They played a few gigs, got a bit of airplay for 'Return To Yesterday' and 'Black Velvet' and they were signed to . The album was deemed 'too much like a demo' and lots of it was remixed in a Big Studio. To me, that kinda missed the point. I thought it was MEANT to sound a little rough and Low-Fi. And by Low-Fi, we aint't talking Guided By Voices... The Indie version got withdrawn and the shiny new version got released and they became a moderately successful band. But they were out of step with everything. All their recordings are fine and they continue to this day - there's even a movie about them, but they've never got the kudos they deserve. That breaks my heart.

Duffy has had a fascinating career, and one day I'll write that book, but right now, here's some music. Not so subtly different from the tunes you may have heard on the radio. I wouldn't normally post an album you can buy or download, but as this is significantly different to the version that's available, my conscience is almost clear. There ain't too many of the 'Swordfish' version around as it was quickly overshadowed by the '' edition. In fact, Swordfish ended up selling them for just £1. I got wind of this at the time and phoned the shop up, desperate to snag a bargain. I asked them to put a copy to one side and I'd be there in a minute...the voice on the phone said 'We've got plenty'. Concerned, I asked how many, just in case they’d all sell out in the 10 minutes it would take me to reach the store. The voice sighed and replied 'About a thousand...'

Here's one of a thousand. And one in a million.