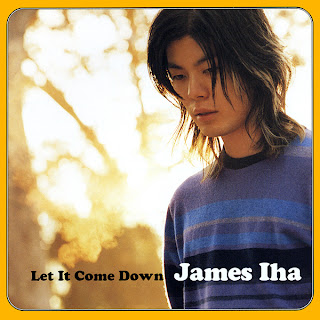 Does the roguishly handsome devil in the picture look familiar? Yep, it’s that bloke from the Smashing Pumpkins who wasn’t Billy Corgan, or the ace Drummer, or one of the girly Bassists….It’s James Iha. Now what’s a ruff, tuff loud ‘n’ nasty geetarslinger like Mr I doing in a jingly-jangly, early bedtime, Blue Nile loving blog like this? Let me explain…

Around the time of ‘Gish’ and ‘Siamese Dream’, I was a bit of a Pumpkins fan. ‘Cherub Rock’ and ‘Today’ are two of the best singles from that period and get played whenever I wanna ‘Rock Out’, in that polite, forty something way which is so popular here at BPFE Towers. But then it all got a bit…overblown. Double albums, I can take…but when ‘Melon Collie…’ was released, I got a little restless. This, coupled with the fact that Billy C started to resemble the Mekon made me feel that the honeymoon was over. It was time for the Pumpkins and I to start seeing other people. But then, along came ‘Let It Come Down’. It arrived in my record shop with no hoo-hah at all. I put it on, expecting to be flung across the room with the full-on ferocity of 100 Marshalled-up Flying Vs, but what I got was…positively pastoral. Yep, while Mr C’s intense and brooding back was turned, lil’ Jimmy recorded a rather lovely, singer songwritery album that sounds perfect in this pleasant Spring evening. (Sorry, that came out a bit ‘Women’s Weekly’, didn’t it?)

It’s a low-key, acoustic based gem of a record with some nice, understated playing and a collection of great songs. Admittedly, it’s a little…’sappy’ in parts, but aren’t we all? James isn’t the greatest singer in the world, but he has a charming voice and the melodies work really well against the diligent strumming of the band. Don’t go looking for stray Pumpkins, as apart from one harmony vocal from D’Arcy, there are none to be found. But what is here is a great, ‘lost’ record. Given the popularity of the SPs, I was amazed to find that this is no longer in print, so as a public service, here it is.

You may have a pretty fixed idea of what this is gonna sound like, given the electrified DRAAANNNGGGG of Mr Iha’s day job,  but this is something else again. The single ‘Be Strong Now’ was the most  Pumpkinny thing on the album and that’s not really very Pumpkinny at all.
After all, it’s a Rushbo recommendation…what more prompting do you need to click on the link?

Thanks to Mick, I've been able to add three non album tunes to the end of the album. They were originally from the 'Be Strong Now' EP - cheers Mick! I've also included the bonus tracks as a separate file if you've already snagged the album.

Let It Come Down
Bonus Tracks