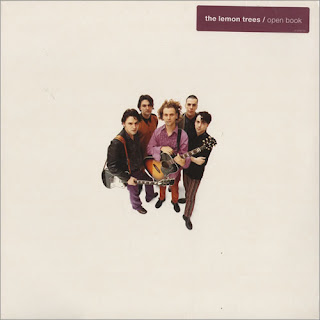 The Lemon Trees were a 1990s pop band consisting of Guy Chambers, twin brothers Paul Stacey and Jeremy Stacey, Alex Lewis and Paul Holman. The band formed in 1993 and recorded two albums, but the second was not released. They disbanded in 1995. (I just copied that from Wikipedia, can you tell?) I thought they were ace and tipped them for big things. This of course was the kiss of death (see Nyack and Belltower for proof). I saw them a few times, supporting bands like Jellyfish (oh my, what a gig) and others and they were always great. Tight playing, great songs, harmonies…they had the lot. Well, not everything – record sales evaded them and they sold about 20 records, unfortunately.

I have no idea why they failed – maybe being a Psychedelic Pop band in the era of Nirvana was a bit of a drawback. When everyone was tearing holes in their jeans, The Lemon Trees were diligently polishing their Cuban Heels and Hofner basses and wondering where they’d put their love beads. They’ve left behind some great tunes tho’ – most of ‘em collected here. I’ve included their one and only album ‘Open Book’ and all the singles with non-album tracks I have. I am missing a few things, so if you’ve got anything that’s not here, please let me know and I’ll add it to the list. This was the era of the multiple format single, which meant that you had to hoover up a stack of different versions of the same song to get everything. What kind of loser does that? This kind of loser.

I’d really urge you to check this band out. Anyone with a love of quality Pop-Rock with a 60s feel will love this stuff. There are echoes of tons of cool stuff in their music – Byrds, ‘Oranges and Lemons’ era XTC, Lilac Time, Diesel Park West….It’s ace, really.

Oh…and yeah, Guy Chambers went on to rescue the career of a certain Bob Williams, a former member of a former boyband or something…..

OPEN BOOK:
Love the sun
Love is in your eyes
Everything I want to feel
Child of love
The way I feel
Instrumental
Tidal wave
Let it loose
I can't face the world
Submerge
Bad scene
Bittersweetness
Open book