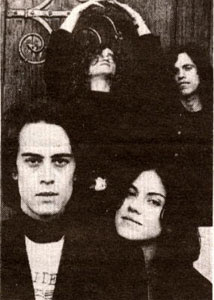 The Belltower were another band (like Nyack), who I stumbled on while trawling through a batch of 'new releases' while working in a record shop. In amongst a pile of rather uninspiring Indie 'product' was the 'Exploration Day' EP by some obscure NY combo...What drew me to them was, firstly, the Terry Bickers production credit and the 'Paisley Underground-ness' of the whole thing - from the packaging to the fuzzed out drone rock of 'Outshine the sun' and beyond. Great hooky tunes sung brilliantly by Britta Phillips (surely the postergirl for the Shoegaze generation) with some ace Psych-Rock Guitar stuff happening behind it.


If you've heard of the band at all, it'll be for the Fountains of Wayne/Luna/Dean Wareham connections - all worthy, but this band deserve to be more than just a footnote. There seemed to be a whole slew of bands at that time (early/mid 90s) who were looking towards pop-psychedelia for inspiration (incl the brilliant Levitation, featuring the aforementioned Terry Bickers). Even Blur dabbled in it - how much does 'She's so high' sound like The Rain Parade? Sadly, very few managed sales which reached into double figures and it faded away, but we're left with some superb music.


(This is a rather odd video - there are a couple of promo vids on YouTube, but the sound quality is pants, so the next best thing is this. It seems to be for Japanese (?) TV and catches the band in their London flat making a rather unappetising looking meal of fried eggs. There are snippets of 'In hollow' and 'Outshine the sun' and some pleasant, if unrevealing interviews. I'm slightly confused by the accents, tho...)

As far as I know, this is the complete Belltower. They managed one LP - 'Popdropper', 3 EPs and a couple of singles. They're all included in the uploads. I had high hopes for this band, but I do have the uncanny knack of picking a loser (see Nyack...) To prove this point, I also walked out on The Stone Roses in a tiny club in Birmingham declaring them to be 24 hour wonders. About a million record sales later, I guess I was proved wrong.

I'd really urge you to take a chance on this stuff...what have you got to lose? If you're into Rain Parade, Opal, the noisier Mazzy Star stuff etc, this'll be right up your alley. Let me know what you think...

I'm indebted (as ever) to Wilfully Obscure and Forgotten Band Planet for much needed facts, figures and music.

Email ThisBlogThis!Share to TwitterShare to FacebookShare to Pinterest
Labels: Belltower