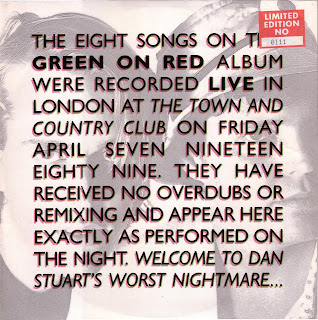 Live albums are a bit of a mixed bunch - for every 'Live At Leeds' there's a ...(insert crappy live album title here). But this is a little piece of history.This is a BBC recording of a tour that GoR would rather forget, but it's got a ragged glory that got smoothed out a little on their other records. I'll let Mr Stuart explain...

This LP was recorded at the end of a European Tour that was beset with disasters from start to finish. There were problems with Exploding Vans, Storms in the Channel, Lawyers, Liquidators, Independent Record Companies, Domestic Dramas, Riots in Italy, Traffic Jams in Germany, The Police in Greece, The Mafia in Sardinia, Stolen Equipment and Out Of Tune Guitars.... and then The Drummer Left.

I saw them later on that year and they were still reeling - a clearly 'refreshed' Dan Stuart, deciding that he needed a break mid gig, sat down on his combo amp and fell over backwards. This was when he wasn't saying 'Big dog's cock' over and over. Or berating the audience ('How do you live in a country where it goes dark at four in the afternoon?') Or my favourite - Dan starts a solo version of 'Time ain't nothing' blissfully unaware of tuning or melody. At one stage, Bassist Rene Coleman joins in, only to be admonished by the clearly pissed-off singer - 'Stop it man, yer spoilin' it!' It was like The Faces, but in plaid shirts and with sensible hair.

Live At The Town And Country Club

16 Ways
Change
DT Blues
Fading Away
Morning Blue
Zombie For Love
Hair Of The Dog
Are You Sure Hank Done It This Way?

Email ThisBlogThis!Share to TwitterShare to FacebookShare to Pinterest
Labels: Green On Red