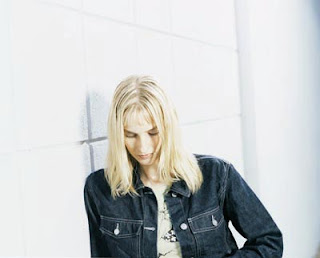 Everyone has a 'secret shoebox' of old cassettes. When I finally decided to make good on my new year's resolution to get this blog up and running, I knew I'd have to venture into the loft and grab that box. Among the hundreds of hours of my old bands’ rehearsal tapes (can't wait to digitise that lot), I found this. It's a gorgeous, live-in-the-studio acoustic recording featuring seven tracks of loveliness, most of which can be found on her superb 'Whatever' album. No info on the box other than the record label (Imago) and the track listing. After a bit of Googling, it seems that the tunes were used for extra tracks (whoops, nearly wrote 'B sides'...) on her 'Stupid Thing' two part CD dealio.

I once saw Aimee play at the Phoenix Festival, where she was scheduled at the same time as Bob Dylan…he was on the Enormostage (crowd in attendance – gazillions), she was in a tent (crowd in attendance – several dozen). At one point, she stopped playing a song to listen to what ol’ Zimmy was wheezing through – ‘Ah, it’s only a new one’ she smiled and launched into another PopRock gem.

My other new year's resolution was to lose 14lbs...can you guess which one I'm doing best at?

Email ThisBlogThis!Share to TwitterShare to FacebookShare to Pinterest
Labels: 'Til Tuesday, Aimee Mann