Never heard of 'em - they any good? 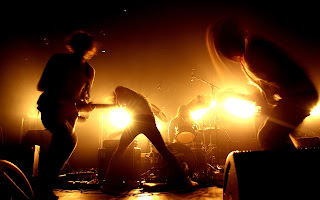 31st August 1994. I’d blagged some tickets to see a fairly new artist play at a little club in the centre of Birmingham. I seem to remember that I had a bit of difficulty getting rid of one of the freebies – no-one wanted to waste an evening watching some guy they’d never heard of. Anyways, it’s too hot to spend a summer evening in some smelly “rock club”, right?

It was a less than capacity audience that made it to Edwards No8 that night. It was hot, too. I don’t think anyone knew what to expect, really – I spotted quite a few freeloaders from other record stores, a bunch of movers and shakers and some regular folks. A few older guys too – apparently this performer’s dad was big in the sixties. Big deal. We all settled in to check out the bands. First up were Faith Over Reason who were pretty groovy in an almost-but-not-quite shoegazey sort of way. They did a reasonable cover of Nick Drake’s “Northern Sky” which I thought showed a lot of class. After 45 minutes they left the stage to a good reception and after the obligatory mic tweakage and linechecks, on sauntered The Main Act. The band looked tired. The bassist leant against his bass rig for the first number, his eyes heavy and his face downcast. This was beyond low-key. The singer, resplendent in army surplus trousers and a white vest picked, up his Telecaster and without any fanfare or even the most cursory of introductions, started to sing. And after about 90 minutes he stopped. I can’t adequately describe the gig, suffice to say that it might be the greatest live performance of anything by anybody that I will ever see. 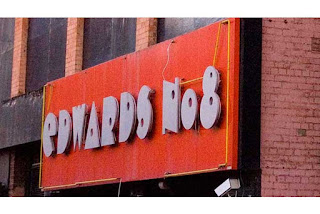 Everyone shuffled out, looking shellshocked. The live performance area of the club was on the second floor and I had to clamber over a number of girls who were sitting on the stairs, sobbing, as if this was 1973 and they’d just seen Donny Osmond. They hadn’t seen Donny Osmond.

That gig was one of the most powerful and intense experiences I’d ever had. The main set consisted of most of the just released “Grace” album – the encore was Big Star’s “Kanga Roo”. I seem to remember that song lasted about quarter of an hour: it just kept building and building and building. It probably didn’t last that long, but by then, I had scant concept of time. I’ve been to a lot of gigs since then, but nothing has had that effect on me. 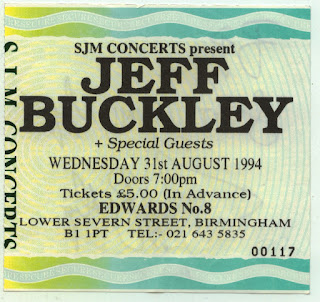 I didn’t know what to expect on that night. I was lucky enough to have been given an advance copy of “Grace” on cassette, so I’d lived with the album for a while, but I had no clue as to what the live performance would be like. In 1994, there was no internet forum to consult to prepare me for my night out. I Don’t think the guys I went with had even heard any of Buckley’s music before that night. They took a risk and they shared this amazing experience.

Live bands are everywhere. At weekends, they’re in all the clubs and bars you go to, playing too loud for you to talk over and spreading speakers and wires all over the place. Annoying aren’t they? Jeff Buckley was one of those annoying weekend warriors once. He’d turn up to a club, put his amp on the spot where you’d normally sit with your friends, trail speaker leads on the floor for you to trip over and generally ruin your drinking time. Or, he might completely blow your mind and give you a story you’ll tell for the next twenty or thirty years – “Hey kids, did I ever tell ya ‘bout when I saw Jeff Buckley play in a club no bigger that this room…?” 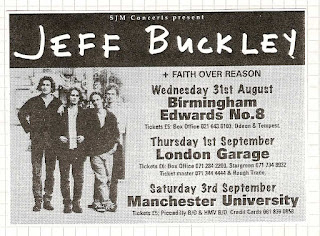 Not every pub or club band will turn out to be Jeff Buckley, but loads of these bands on their first tentative steps to fame and fortune (or crash and burn) are worthy of your attention. They’re out there night after night, often playing in places that have no business having bands playing in them at all. They play, pack up and either crash on someone’s floor, sleep in the van or maybe head off to some nasty Bed and Breakfast where they all sneak into one room. They get up and do it again the next day.  If they sell some T Shirts or CDs at a gig, then maybe they’ll get to eat lunch. No one gets rich on record sales anymore, so live performance is the main revenue strand for musicians today. Ever wonder why it costs a week’s wages to see a big band now? The production costs used to be subsidised by the increase in record sales generated by a tour. Those sales aren’t there anymore. If you’re in a band on a tiny label – or with a self-released album – it’s a major consideration to play a show outside of your local area. I wonder how many amazing bands we’ll never get to see because it’s just not commercially viable for them to travel to a gig?

Try and see a new band when you can. Most clubs sell beer, so if the band isn’t to your liking, have a few pints and I guarantee they’ll sound better. Well, that’s what I say to people who I’m trying to convince to see my band. But the main reason you should see new bands is simply this: bragging rights. My older brother delights in telling me that he saw The Kinks at a club in Wolverhampton. A friend of mine saw The Sex Pistols in a local bar that held about 100 people. I saw Jeff Buckley on a Wednesday night In Birmingham.