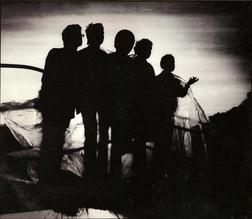 Well, my erratic posting and esoteric choices mean my stats (every Blogger is obsessed with their stats, right?) are in the dirt, so the gloves are off. I could either come back with my previously unreleased Beatles footage where they jam with Hendrix and Dylan on an embryonic version of ‘Stairway To Heaven’, or I could give you ‘Zib Zob And His Kib Kob’ by The Noseflutes. Right you are then…

Here’s a bit of context as I know you BPFErs love a back-story. Back when I used to work in A Very Big Record Shop, one of my colleagues was a charming guy called Chris Long. He was (and probably still is) six feet plus, skinny as a rake and topped with an alarming head of wiry curls. These curls were often shaped into a mullet for formal occasions. It turned out that, by twilight, he was a member of ’s foremost Captain Beefheart meets The Fall (with Mark E Smith in a good mood) with a healthy dash of early XTC and a teensy bit of Prog rock styled combo, the Noseflutes. To further endear him to me, he played banjo, violin and ‘keyboard’. The keyboard in question was the kind of thing which is now available in Toys R us for about a fiver. And the icing on the cake was his nomme du guerre: Legs Akimbo. Whattaguy. 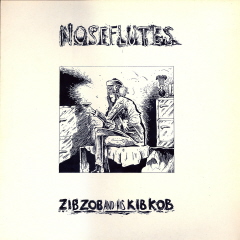 I made my live debut supporting the ‘Flutes. My terrified three piece JangleJingle combo made curious bedfellows with the Avant-Pop overlords in all their glory. We got away with it (just), but I was totally smitten by the headliners. They were often lumped in with a load of ‘quirky’ British bands who stretched student humour to breaking points – weedy songs badly played, making a virtue out of their incompetence but with no original ideas to counterbalance the cack-handed strummage. The Noseflutes could play. Occasionally, a Disco beat would pop its head over the parapet, then you’d hear twelve bars of Yes, then the frontman would whip out a sax and we’d get ‘Sportsnight With Ornette Coleman’ for a minute or two. They were brill. And people used to dance to them…really.

John Peel loved ‘em and they did four fantastic sessions for him. To celebrate the fact that they were on national radio, they would adopt bizarre pseudonyms for these appearances and it was worth staying up just to hear the lovely rounded tones of the late JP announce the names of: Sven Vortex, The Hog, Peter Heater, Shrobengo Tullonge His Levitating Masterfullness, Vic Pelthrust and Ralph Dangerfish among others. (Side note – Chris once adopted the name of a colleague of ours who was in hospital when a session was broadcast. John Peel dutifully announced the band line-up, our bed-ridden colleague screamed, thus waking the entire ward and bringing several alarmed nurses to her bedside. True story).

They made three great albums, but ‘Zib Zob…’ is the great-er. Sadly none are available which is a fugging disgrace, so I feel I need to bring this to your attention as a public service. The band have semi-reformed and are recording/gigging under the names The Crimplene Explosion and The Clicking Stick. Lovely. Here’s a link to Legs Akimbo’s MySpace Site here. Great tunes abound.

So, you came to this Blog looking for Tommy Keene demos and left with The Noseflutes. That my friend, is a damn good deal.

('Mellow Throated' - not from 'Zib Zob...' but the only promo video they ever made!)

Zib Zob and his Kib Kob

Email ThisBlogThis!Share to TwitterShare to FacebookShare to Pinterest
Labels: Noseflutes