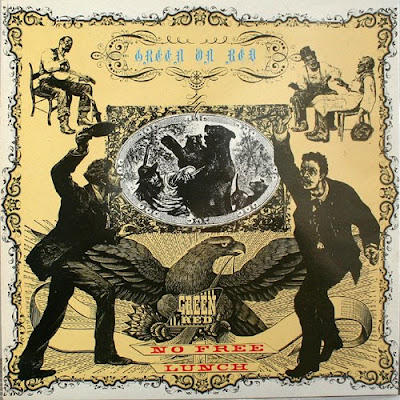 Green on Red live were a mercurial, tight-sloppy rag-bag of contradictions - the unassuming Guitar maestro rubbing shoulders with the loose cannon singer, backed by a solid (if impermanent) rhythm section. Sparks of brilliance would fly, often followed immediately by astonishing pratfalls. Just like real life. In short, they were a must-see. The studio albums were a different thing...the songs were always great, but they just lacked the 'could go either way' edge that their live performances had in spades. And this is me trying to convince you to download a studio album...what a salesman. IMHO (as the young people say) this is the most consistent and convincing of their studio albums. There isn't a duff track on it. The band were writing fantastic material and this combined with a well chosen Willie Nelson cover add to make a quiet landmark of a record. And some genius has deleted it. If I was a diligent Blogger, I'd check all the 'best ofs' to see if these tunes are available somewhere, but I'm feeling slightly jaded today, so do yer own research...what do you want from me - blood?

For your delectation laydeez and genlemen here is a rip from the original cassette release. Why cassette? Well, someone thought it would be a good idea to include a 13 minute version of 'Smokestack Lightning' as an incentive to buy the album on that format. It ain't an essential addition to the repertoire, but it's entertaining enough.

PS...I played 'Keep On Moving' in the first gig of my first band...Hi Darrall!

Email ThisBlogThis!Share to TwitterShare to FacebookShare to Pinterest
Labels: Green On Red